Melbourne artist, Regina Hona initially trained for three years in oils in the classical tonal realism method. She later attended a number of workshops in various mediums that have allowed her to expand her knowledge and technique through experimentation.  Regina works predominately in oils, and soft pastels, and specializes in painting the human form and water subjects. Regina enjoys combining the variables of composition, lighting, backgrounds, edges and the materiality of paint.  This approach allows each painting to offer a uniqueness in the experience for the viewer.

Regina  is a member of the artist group Fusion6 that challenge themselves to paint unique and creative concepts. Their About Face exhibition toured to several regional galleries, and their current project, Portraits From A Hard Road, is a 3-year project based on the subject of homeless youth  exhibited in Melbourne during November 2011.

2010 – Hidden Faces of the Archibald, Melbourne

2008 – Hidden Faces of the Archibald, Melbourne 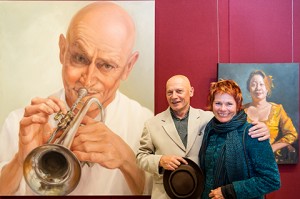