“In the 1980’s I created a business reproducing Australian art on greeting cards for the not-for-profit sector, coming into contact with some significant artists and their galleries.

My creativity has taken various forms throughout my life, from hand-knitted designer clothes, to building furniture; but in 2003 while still working in a business management role, I created my first painting. Without a formal art degree each new painting was a steep learning curve as I experimented with new techniques.

A chance meeting with the artist Jeffrey Smart on the Greek island of Kos in the early 1970s turned out to be crucial to my career some three decades later. I had decided to enter a portrait into the Archibald Prize in 2005, and was overjoyed to receive a positive response from Jeffrey Smart when I asked if I could paint him. 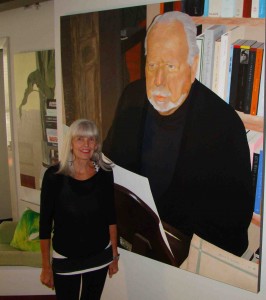 Polly Ifould with her portrait of Jeffrey Smart

Luckily, he remembered our meeting and was delighted to sit for me! It was marvellous to visit him in his home in Tuscany in the middle of winter. A man of great charm, wisdom, talent and intellect, he played piano for me whilst the fire roared in the early evening chill at ‘Posticcia Nuova’, his beautiful villa.

The resulting portrait was selected for the ‘Salon des Refusés’ exhibition, and remains in my studio where Jeffrey still both inspires and keeps an eye on me. Fortunately, commissions and sales followed, and since retiring from business in 2007, I am focused on art. My canvases are large, detailed, and my colours bold.

In addition to portraits, my body of work includes urban, rural and still life –  from serious portraits to zany ‘designer cows’.”