“Although Australian based, I have spent several years living in Southern Africa and New Zealand. Watercolour is my great love; it is the fluidity and spontaneity that attracts. As a medium, watercolor lends itself to the softness and curves of the human form. It allows the artist great freedom. Portraiture by its very nature is an intimate experience. Especially with children I see the love of a parent for their child. It is that individual passion and character I hope to portray. Preoccupied as we are, perhaps from very different backgrounds there is always a human connection. I also enjoy creating simple graphite portraits – works on paper. My portraits have been commissioned throughout Australia as well as in United Kingdom, USA, South Africa, Singapore, Vietnam and New Zealand.” 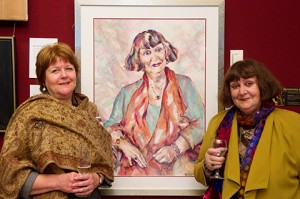 Dee Jackson with her sitter 2013