Val Landa is a painter and ceramist, and was born 1940, Sydney. She has been painting and drawing since the early 1960s. She has a love of colour, loves to draw the nude and often will place a figure in an imaginary landscape. She especially loves Portraits of people and specializes in dogs. She accepts commissions of all kinds.

Val is represented in private collections in the USA, UK Hong Kong and across Australia, has exhibited in numerous mixed and group shows in private galleries, and has exhibited at the New York Art Expo International in February 2003.

1970s – member of a life drawing group at Hunter’s Hill which included Nora Heyson, Franklin Bennett and other well-known artists.

1992 she studied at the Boston Museum of Fine Arts School, USA.

Over the years Val has taken part in numerous exhibitions and group shows, particularly with  the Willoughby Portrait group.

October 1996, Australian Artist Magazine published an extensive article about her painting methods and featured many of her paintings.

2001 – painting and drawing workshop in Adelaide conducted by the Dean of the New York Studio School, New York.

She also won 2nd prize in the Rural Landscape section at the Royal Easter Show. She won 1st Prize at the Inaugural Art Exhibition at Woollahra School, Sydney.

2003 she received a VHC Award in the Art of Sydney Exhibition.

2005 – the Drummoyne Art Society ‘Joshua Smith Best in Show Prize’, the ‘Modern Painting Prize’ and a ‘Commended’ for Landscape..

2nd prize for Drawing in the Kurringgai Annual Art Prize.

2nd prize in the Rural Landscape section at the Royal Easter Show. 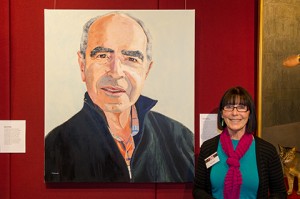 Val Lander with her portrait of Paolo Totaro 2013