Greg Somers was born in Sydney in 1950, and trained at the Julian Ashton Art School. When Somers was young, he was drawn to the surrealist artists.  His colour sense was developed, he says, ‘using colour harmony based on music theory.’ Now based on the central coast of NSW, he is a representational painter, specialising in portraiture and figurative landscapes. He has had four solo exhibitions, has exhibited in several group shows, and has also illustrated many educational children’s books

Greg Somers’ 2010 self-portrait hung in the Archibald that year and was described as “a celebration of his contentment at being the age he is – an increasingly, but happily, grizzled 60-year old. It also acknowledges the influence of the great artists.”

With a title that reveals his love for plays on words, the painting “Self portrait with Dory in Grey”  shows a wry acceptance of the state of things and the life well-lived –  rather than yearning after eternal youth as in Oscar Wilde’s classic novel ‘The picture of Dorian Gray’. The  tie that the artist is wearing is adorned with small references to the artists Somers admires –  Frida Kahlo, and two paintings by Delacroix: Liberty leading the people and Attila tramples Italy and the arts. 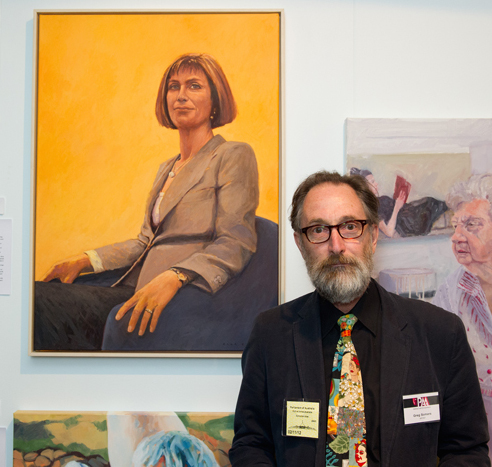