Stephanie Galloway Brown is a highly regarded Australian portrait artist with a passion for culture and a remarkable story working mostly in the medium of beeswax, oil & encaustics and has commissioned works hung in many private collections around Australia, New Zealand & the UK. Stephanie runs portrait painting and drawing workshops. She was a PAA committee member from 2010-2012.

Stephanie is the creator & producer of the Extraordinary Faces Project, a series of ongoing portraits and a book. She says that she mostly stumbles upon real life extraordinary people going about their everyday lives and is often inspired to delve into the essence of their life behind the portrait.  “I share my discoveries of the gems in our midst on the website  – www.extraordinaryfaces.org website.”

“I was born and raised on a dairy farm in Matamata, New Zealand, but I was always an explorer and I left my  homeland in my early 20s to discover the world, immersing myself in the local culture wherever I travelled. From the European art galleries and Turkish mosques, my journey eventually led me back to Australia where I settled in the Northern Beaches of Sydney. For many years I followed a commercial art career in graphic design and studio management before leaving it behind to focus completely on fine art.”

MY PROCESS – “Ideas about colour combinations and textures percolate in my thoughts for some time. Using beeswax in the work for me was like discovering the missing link, bringing oil paint, pigments and earth elements closer to a natural state. I start by building up an abstract surface to work back into using materials mixed with encaustic or cold wax medium. It’s a very deliberate, violent attack on the surface –  pouring, fusing, scraping, digging, gouging, sculpting, a process of destruction and rebuilding until I see the form start to emerge as if appearing from a haze. Slowing down I become more focused and deliberate, building up more realism, revelling in the unexpected beauty of imperfections. The wax brings a deep rich translucent sheen that almost glows, reminiscent of the layers of skin.”

Stephanie is available for all portrait commissions in oil paint, graphite or pastel and specialises in children’s portraits. She is also popular for pet portraits. Some of her many subjects include:

A BACKGROUND IN DESIGN AND TUTORING 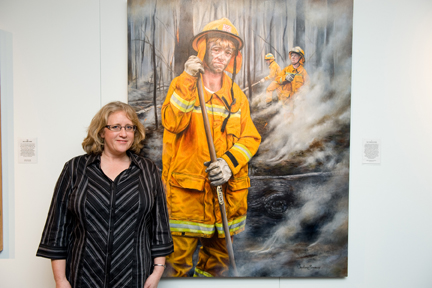 One Response to Brown, Stephanie Galloway