Christine Lott is influenced by Japanese woodblock and the aesthetics of Japanese design. She plays with patterns, grid forms and the natural abstraction of forms and combinations, using rich colour laid solid with hard edges, contrast and silhouettes.

“After my formative years specialising in ad agency line drawing and halftone wash, I advanced to illustrating children’s books, which required the creation of facial expression in animated characters.

Portraiture was a natural progression from this, and I still enjoy life drawing sessions, as I am fascinated by people’s individual shapes, and I love the challenge of depicting their personalities and emotions. I travel constantly and continually admire the nuance of features of ethnicity. In my work I prefer non-static poses that allow playful use of colour, and an opportunity to play with the effects of highlight and shadow. My fascination is with everyday faces, and seeking out the myriad colours in complexions and skin tones and wrinkles, all leading to the joy of seeing a character likeness emerging from the canvas. I work in oils and pastels. My influences have been among the greats – Singer-Sargent, Frans Hals, Sarolla; and local artists Robert Hannaford, and Esther Erlich and so many PAA members.” 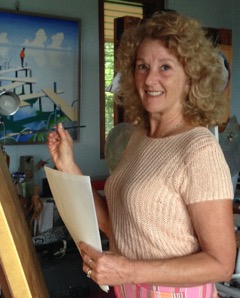 Christine Lott in the studio