Jan Williamson is a professional artist who specializes in portraiture and figurative work, with Australian and International commissions. As one of Australia’s premier artists, Jan’s work portrays people and intimate studies of children playing on the beach, or engrossed in their own world, oblivious to the influences around them.

Her portraits have been selected as finalists in all the major Australian Exhibitions. A finalist many times in the Archibald, Salon de Refuses, Moran, Shirley Hannan and Portia Geach Portrait Awards, and winning both the Archibald Packer’s Prize and Peoples’ Choice twice.

Jan has travelled to the Northern Territory to paint the senior indigenous artists and children from Utopia. She is a foundation member of Portrait Artists Australia.

Jan Williamson is highly sought after as portrait artist and among her many subjects are : 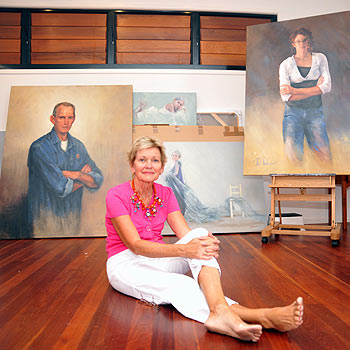 Jan Williamson in her studio