Born in Malaysia of Australian and Scots parents, Howard Tweedie lives and works mainly in Australia. His s works are held in private collections in Australia, UK, France and Vietnam. Howard currently works mainly outdoors and from his Artarmon studio.  He studied at the Julian Ashton Art School in Sydney, the Royal Art Society of NSW and with Studio Escalier, France 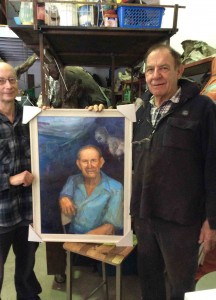 Howard Tweedie with Alan Somerville and Tweedie’s portrait of Alan

“My passions are for colour and movement and the strange wonder of what we’re seeing – in people, places and objects. I love the never-ending challenge attempting to master the tonal richness, subtleties and daring of oil. With portraits, I try to show that special something in each person within the amazing architecture of the human face.”