[Coralie Armstrong 1945-2017 was an artist, conservationist and volunteer palaeontologist at the South Australian Museum. Coralie painted the Australian landscape and wildlife as well as the portraits she exhibited with PAA. The photo at the bottom of this page was taken at our last exhibition in Melbourne 2014 ]

“I was born in 1945 in central western NSW. I studied science at the University of Sydney, and then I attended evening classes at the Royal Art Society of NSW in 1966, 1967, 1970 with Allan Hanson and Fred Bates. I was a scholarship student in 1967 which included landscape watercolour classes with G. K. Townshend. I attended evening art classes in London in 1968 and 1969 with Raymond Coxon, and landscape classes with Fred Bates in Sydney from 1970 to 1980. I moved to Adelaide in 1981 and attended tutorials in painting with Bruce Vinall in 1981 – 86 and with Robert Hannaford in 1984.”

AWARDS in regional shows in Australia

“Rocks”, a watercolour painting, was acquired by Broken Hill City Art Gallery in 1993. 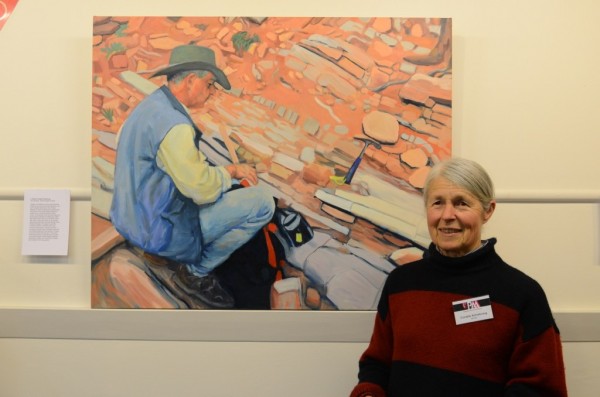