Louise Beck’s desire to paint began at an early age and she received her artistic grounding at Julian Ashton Art School. Creative juices were put on hold for some years while she reared a family and pursued a long term career in teaching. During this time she wrote and illustrated a number of books.

However, her abiding love is portraiture in oils. Commissioned portraiture comprises a significant part of Louise’s artistic output, but she accepts commissioned work with landscapes and private gardens as well.

1999 – first exhibition at the Balmain Watch House in September 1999 with friend and fellow painter Yolanta Desjardins.Yolanta and Louise met under the tuition of Yve Close while specialising in portraiture. In recent years, her painting expanded to landscape studies and mixed media with painting trips to the Australian Alps and overseas to Spain and Britain.

2005 –   second SOLO exhibition entitled “GLASS” at Studio W at Woolloomooloo.This exhibition represented a departure from her earlier work, focusing on Sydney’s glass skyscrapers – their reflections, their distortions and their refraction of light and colour.  The result is a vibrant and surreal view of Sydney and its surrounds, which Louise refers to as “skyscapes” 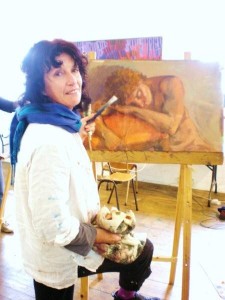 Louise Beck in the studio

Louise has been represented in many collections and exhibitions, winning first prize for her landscape in the Hunters Hill Art Exhibition. In addition, she has won numerous awards in the, Drummoyne and the Northern Suburbs Art Societies for portraiture and landscape. The year 2001 was completed with another very successful exhibition with three other artist friends and a sculptor, again at the Balmain Watch House.

Commissioned portrait work comprises a significant part of her artistic output and recently she completed a large triptych commissioned for the foyer of a mid city Sydney law office. 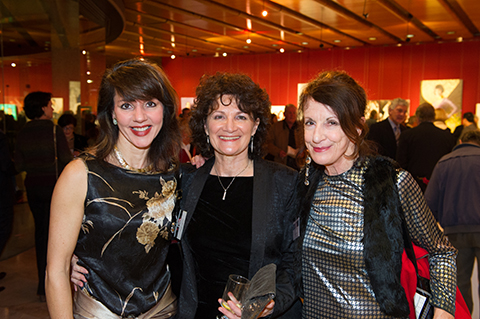 One Response to Beck, Louise