Kevin Oxley OAM 1941 – 2016.  Born in Hay, NSW, Australia, in 1941, Kevin Oxley became a full time artist in 1967, and worked as a professional painter, sculptor and printmaker for more than 30 years. His work is in art collections in NSW and Queensland Universities and TAFEs. Kevin was a self-taught artist, and developed into an art teacher, a curator and a gallery director. He was also a poet and musician. He was “Artist in Residence” for the Australia Council.

Upon being awarded the OAM in 2014 for services rendered to the arts in Australia, Kevin Oxley was interviewed on ABC Radio. Here is a LINK to the interview  – https://soundcloud.com/abc-sunshine-coast/kevin-oxley-oam-shares-his-thoughts-on-the-australian-art-industry –

Oxley worked in an wide range of mediums including oils and acrylic paints, also metal, ceramics, clay and wood, intaglio etching, and fibre sculpture. His self-portrait was a finalist in the Archibald Prize. He was commissioned to paint the portraits of Sir Phillip Baxter and the legendary NSW premier, Jack Lang.

During the 1980s Oxley was co-ordinator of the Doug Moran National Portrait Prize, and Director of the Tweed Shire Council’s Regional Gallery.

“I enjoy painting portraits because the face of a person holds the entirety of their life. We are so attuned to the subtlety of expression learned subliminally over time. To look into a face and read those maps of time are a challenge. I believe any portrait painted by a competent artist is a fusion between artist and sitter. A photograph can never rival a well painted portrait because time is stripped from the equation. A photograph is probably recording a 60th of one second in time. A painting is a fusion of impressions over hours, days or weeks. Each hour tempered by conversations between artist and sitter for the duration of the portrait. This interaction is finally what is recorded. It is not a ‘frozen moment “. It is a visual documentation of a whole string of moods, feelings and views represented in the sitter from which all can see the whole person.Likeness  is paramount in a portrait – without a likeness there is only a painting. A painting only becomes a portrait when it portrays  a person.”

In June 2014 Kevin received the Medal of the Order of Australia on the Queen’s Birthday Honours List, for his contribution to the Arts. 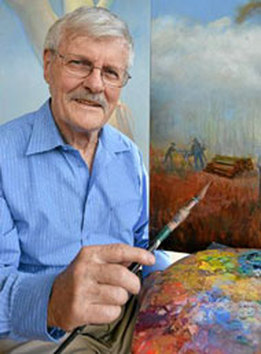